Our Spiritual Home: Orthodox Cathedral of the Transfiguration of Our Lord (OCA)

Home » Cathedral of the Transfiguration of Our Lord (OCA) 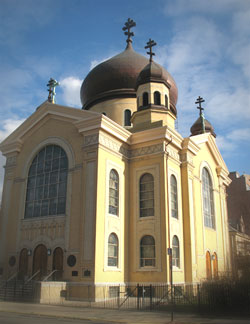 The history of the Russian Orthodox Cathedral of the Transfiguration of Our Lord:
One hundred years ago the founders of our parish came from Russia and from Galicia(Poland). They settled in Greenpoint, Williamsburg and Maspeth(New York) and did their best to keep and follow their Orthodox faith. As a result, fraternal organizations such as St. Olga's and St. Michael's were organized to help many with financial help and fellowship. From this fellowship would be built a church with five cupolas that would become an important part of New York City, an icon of its cityscape, as well as the spiritual home built on the landscape of the hearts of the first and the many generations of Orthodox faithful who followed.
First years liturgical services were held in the former Methodist Church, which was renovated and incorporated as Russian Orthodox Greek Catholic Church of St. Vladimir in 1908.

In 1915, the fast growing parish decided to built a new Church. Father Ivan Kedrovsky who was assigned as Rector in 1915 and parishioners-activists found property in Greenpoint. An architect, Louis Allmendiger created blueprint based on the design of the Kremlin's Cathedral of the Dormition in Moscow. Construction on the new Cathedral started in 1916 and was completed in 1921. The official charter name for new church was recorded as the "Russian Greek Orthodox Church of the Transfiguration". Metropolitan Platon consecrated the Church on September 3, 1922.
During the Great Depression the Church expirienced serious financial problems. With a big efforts Father Constantine Buketoff and parishioners-activists saved the parish from foreclosure.
Under the wise guidance of Archpriest Igor Tkachuk, in November 1969, the Cathedral was designated a Landmark of the City of New York and in April 1980, the U.S. Department of the Interior registered the Cathedral as a National Historic Place.
In November 1992, Father Wiaczeslaw Krawczuk was assigned as Rector. At that time the parish became aware of serious problems with the roof and Cupolas and began thinking about completely renovating them. A complete new roof and replacement of the copper on the cupolas were estimated as $1.2 million project. In 1999, Father Wiaczeslaw and the Parish initiated a fundraising campaign through different ways (concerts, auctions, bake sales, donations). With matching grants from New York officials and all great efforts of Parish the renovation of the cathedral's exterior was finished in August 2008.

"For now before us there is a great deal of work yet to be done - the repair and renovation of interior with frescos and iconostasis restoration. Every donation is helpful and needed. I am certain that with your help we will soon be able to begin this expensive project. It is very important to keep our Cathedral for future generations of Orthodox faithful. May God bless you!" -   Fr. Wiaczeslaw Krawczuk, Rector.
We would like to inform our visitors that 10% of all profits made through this store will be donated to the Transfiguration Preservation Trust Fund for further renovating works of this Cathedral.
We have the largest selection of Ukrainian icons, Orthodox crosses, Easter Gifts eggs, Christian traditional gifts and many more. Enjoy your visit!

FOR MORE INFORMATION ABOUT OUR CHURCH, SERVICES AND CHURCH SCHOOL CLICK HERE
OR VISIT US AT:   228 North 12th Street, Brooklyn, New York 11211